We had an opportunity to interview both KKSlider and Bunni, so these creative brothers will be sharing this week’s spotlight. Let’s get to it!

Fortnite Team: What made you decide to jump into Creative Mode?

KK Slider: Last December, when I saw the early access of Creative, I decided to give it a try and see what it was capable of. It was fun to mess around with the early devices and to set up stuff like launching ATKs into people which would eventually become games later on down the road.

Bunni_: Right when Creative Mode was first introduced, my brother and I just started messing around in Creative and trying to see what kind of games we could create, even though it had some limitations at the time.

FT: What are your favorite things about Fortnite and Creative Mode?

K: The best thing about Fortnite and Creative is how it’s evolving all the time. Every few weeks there is a huge update that adds so many new possibilities to what can be created. I also love how easy it is to build with friends which makes the Creative experience that much more fun! It’s also very rewarding to see others enjoying stuff that you make.

B: My favorite things about Fortnite and Creative mode is it gives Fortnite a whole new way to play the game and experiment with mechanics you might never have tried before.

Fortnite Team: Who is your favorite creator and why?

K: It’s hard to pick just one but my favorite creator would have to be BluDrive. He not only builds great maps, but also knows how to build and manage a community. He’s also a great leader and coordinates group projects well. He’s been great to work with and is an all around great person that cares about the Creative Community.

B: My favorite creator aside from my brother, KKSlider, is Wertandrew because of his insane work ethic.

FT: Do you consider yourself more of an artist, level designer, coder or game designer? 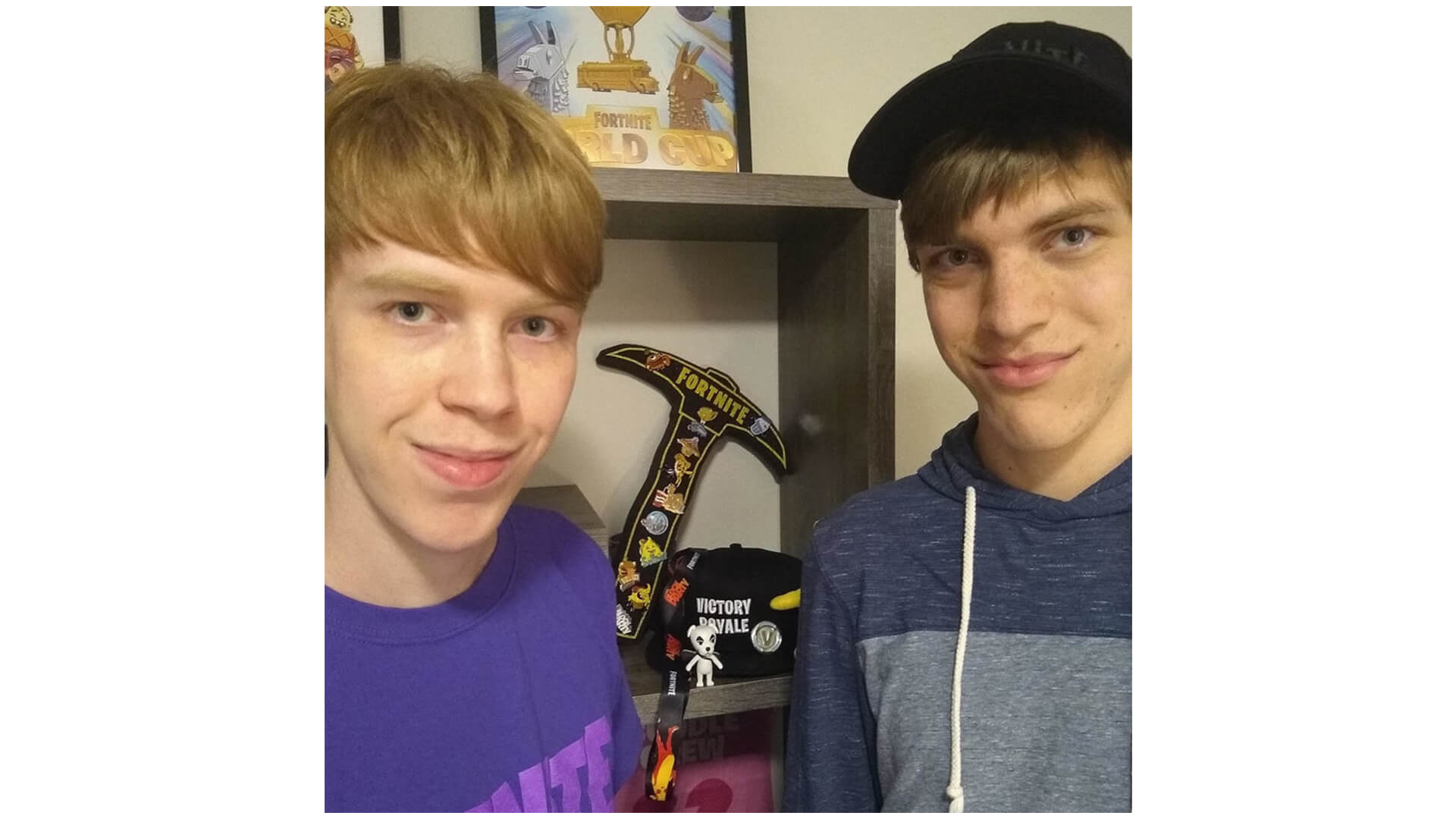 K: I would put myself in the coder category as I mainly focus on devices and how they can be used to create new types of gameplay. I have very little to no background in coding but the great thing about Creative is that you don’t need to know code to make complex mechanics. I find it really fun and interesting to be able to lay out devices in the 3D world to create these massive rooms filled with triggers and sequencers that all work together to make something that others might think is impossible within Creative Mode. It takes a lot of patience and problem solving, but it’s worth it to be able to push Creative to its highest potential.

B: I find myself enjoying architectural design and overall aesthetics when it comes to building, so a cross between level designer and artist.

FT: What is your favorite thing you made in Creative Mode?

K: My favorite creation is my recent 1v1 Tournament Map that puts 16 players through a series of 1 v 1 battles, until only one is left standing. The visuals on the map are quite simple, but what I’m really proud of is the mechanics behind making the tournament work automatically. Hundreds of devices including triggers, sequencers and even flippers are used to set up arenas, track players, move players between arenas, track times for end of game rankings, determine when to start and end rounds, and more. It’s been my most technical creation yet with about 50 iterations over the past 3 months and I’m very excited that it’s finally been released!

FT:  Where do you get your ideas from?

K: I generally get most of my ideas from games that I have enjoyed playing in the past. One of my first games, Avalanche, was inspired by a custom game in Halo 3 where you have to dodge giant golf balls, and I swapped the golf balls for ATKs. If there is something I remember having a lot of fun with from my childhood, I will think about if it’s possible to recreate in Creative.

FT: Could you explain your creative process?

K: I always start by thinking about gameplay first before aesthetics as most of the time the design of the map has to work around the gameplay. Once I think of a unique idea, I’ll make a very basic version of it to test the mechanics before going full scale. If the testing goes well, then I will build out the rest of the mechanics along with the map and finish with detailing. The key is to not get too far into the project before finding out that there is a major flaw in the concept that makes you start over. Always do a lot of pre-planning to find the perfect concept that you can feel good about spending a couple weeks working on without giving up on the project.

FT: What one tip would you give to someone who is just starting in Creative Mode?

K: The tip I would give to new builders is to find your specialty when it comes to Creative. For example I’m much better at mechanical builds than decorative builds so I tend to stay away from decorative maps or I work with someone who is better at that side of Creative such as my brother. I see too many new creators try to be good at every aspect of creative which can be overwhelming and the end result is a lower quality map. So try to experiment around for a while with mechanics or decorative building or even game design to see what sticks out to you then focus on it until you become one of the best at that specific thing.

B: A tip I would highly recommend someone just starting in Creative Mode is paying attention to the prefabricated builds that you can spawn in. By doing so, you can see how they are built and work off of how they were made to make something completely new!

FT: Do you prefer to work alone or as a part of a team? Why?

B: I usually like to work with my brother most of the time. Simply being able to bounce ideas off each other can be insanely helpful!

FT: What brings you the greatest joy from working in Creative Mode?

B: Being able to put my ideas into something others can play and enjoy is always incredibly gratifying to  me.

K: The most enjoyable part of Creative is the people you meet along the way. I’ve met so many awesome people from around the world and get to talk to them every day while doing something we are all super passionate about. We all help each other out and give feedback to help make ourselves better builders.

FT:  What kind of feedback do you look for when you put your creation out into the world?

K: The first thing I look for is feedback on any bugs that might pop up during gameplay. Once those are fixed I then look at how easy the game is to understand for someone who has never played it. Then I look at ways I can improve the overall experience of the game. The community has definitely helped become a better creator.

B: I prefer as much feedback on my creation as possible! It’s always good to hear from as many different types of players as possible, no matter what their skill level is.

FT: How long does it usually take you to get from start to finish of a project

K: If you include the pre planning and post release promoting of the map, it can take anywhere from 1 week to many months to go from start to finish on a project. On average it’s been about 3 weeks for me.

FT: What are some of the challenges you face when creating?

K: One challenge I have when creating is how quickly I have to build so I can release the map before it gets outdated. It’s hard to find the perfect amount of time to make a quality map while also not taking to long so it doesn’t get overshadowed by newer more advanced mechanics. Another challenge that a lot of creators face is “map burnout” where you’ve played your map so many times that you start to hate it even if it’s a good game. I always try to have two projects going on so I can hop between them to avoid getting burned out.

B: As with any game that has some sort of building, there are always some limitations. The challenge I have faced when creating is managing your memory as well as putting in as much detail as possible. This can definitely can be a delicate balance at times.

FT:  Are you annoyed or do you rejoice when players play your game differently than  you intended?

K: I love it when players find unintentional ways of playing my games because it means I can take care of the problem before others abuse it. Sometimes players find really cool ways of playing that I’ll keep in. For example, in Avalanche, players found a way to use the quad crasher to launch over the boost pads to get to the top in record time!

Thank you both for the interview!

Don’t forget to follow @FNC_KKSlider and Bunni_ on twitter to see what these creative brothers are up to!

Is there someone in the Creative Community you would like us to interview for the Creative Spotlight? Tweet us at @FNCreate!